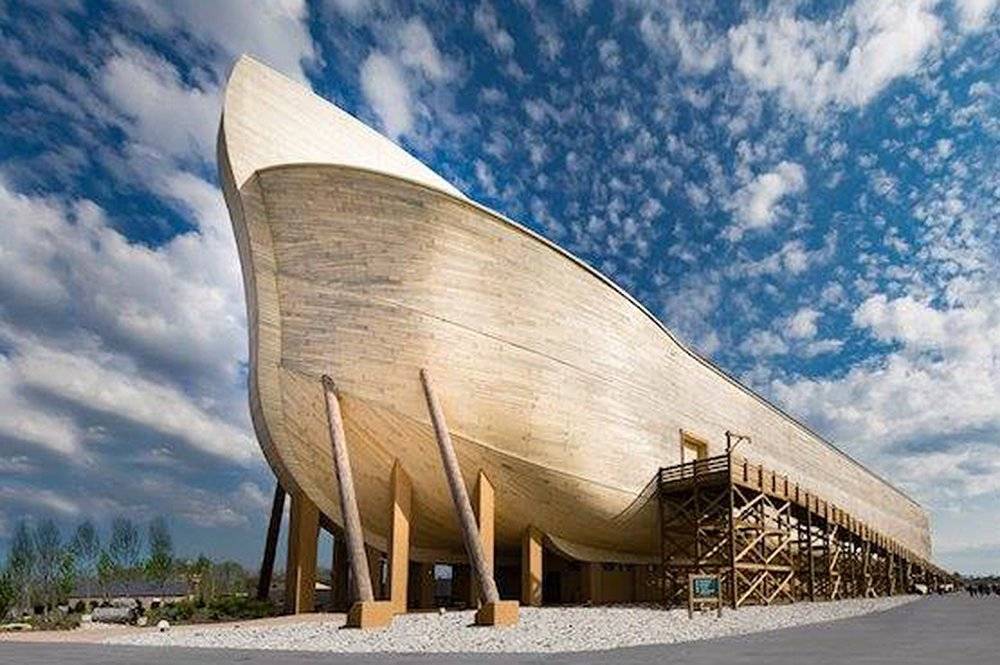 While researching and preparing for my next Simon book I wanted an opportunity to see Noah’s Ark at the Ark Encounter.  As our travels took us through Cincinnati, Ohio it was the perfect time to stop and see it.

As you enter the parking lot you have to search to find it.  I don’t mean it’s hard to find, it’s just a long ways from the parking area.  Keep in mind that they are building this property to be a type of amusement park, not just an ark.  The parking area is a long way from the ark, however they provide shuttle buses that are never more than a couple of minutes wait.

When we arrived in our RV I took a few minutes to survey the view.  The ark sat about a half-mile from our parking spot on an opposite hill.  I tried to imagine the thoughts of the folks in Noah’s day who would see that boat from a far hill.  Although there were significant cities in those days, and appreciable technology, nothing would compare to the magnificent size of this “building”.  Certainly, they had boats, and even ships, but this would be more like a giant barn or enclosed city.

The bus ride to the ark was quick and comfortable in the heated and air-conditioned (we needed both throughout the day) transit bus.  The road to the ark winds up and down through the hills on each side of the valley.  The road is nice but poorly planned.  The buses are not able to cross each other except on the limited straight sections.  There is even a bridge across a gully and stream that is only wide enough for one bus.  It’s no big issue, they seemed to have worked out a system and communicate via radio to handle the traffic problems.

Approaching the ark was an emotional experience for me.  I can’t find the words to describe the size.  Yes, I can tell you the dimensions, but numbers don’t describe the enormity of this ship.  It’s not what I imagined at all.  Words escape me but the experience was breathtaking.  As you converge on the ship you can look up and it towers over you like an overhanging giant stadium.  This wooden vessel can’t be absorbed with the eyes from any perspective.  It has to be examined in sections.  The bow of the ship looms taller than a five-story building and the length is more than one-and-a-half football fields.  The top deck is large enough to carry three space shuttles nose-to-tail with room to spare.  Just to walk the length was a time-consuming event.  Again, I can’t put this into words to help you grasp the sheer massiveness of the ship.

Stepping inside I was somewhat less in awe.  Yes, impressive and professionally done, but the reality of the awesome size wasn’t as noticeable inside.  As you climb the ramp and enter the main body of the ship you’re besieged by photographers who want to take your picture so you can pay an exorbitant price later to have your photo superimposed in front of the ship.  I felt it was cheesy and irritating to be ambushed in this way.

In my typical introvert way, I found my way quickly to the lower bow of the ship.  The crowds were headed in one direction, I was running for solitude.  In this isolation, I found the awesomeness of the ship again for just a moment.  In the darkness of this tiny space was a sound system that imitated the crashing of the sea, the fearful noise of creaking boards, and the crashing of the storm above.  I found myself relating to what Noah’s sons might have felt: fear, loneliness, and despair; cold, dark and noisy, floating around in the great unknown; no understanding of the future, no hope for the past.

Moving from my private seclusion I again joined the crowds to view row upon row of hand-made wooden animal cages.  The cages, presumably built mostly from bamboo were of various sizes and held many exotic and long-past extinct animals.  Again, the recorded sounds were realistic and eerie.  Alongside the cages, above, and everywhere possible were rows of clay freshwater canisters and bundles of various feeds.  The lower deck seemed to somewhat realistically characterize the enormous amount of work that would have been involved in managing the thousands of animals on board.

As we worked our way to the second deck the inside of this awesome ship become more of a museum than Noah’s Ark.  Excellent detail, but no longer maintained much of the feel of the enormity and purpose of the original ship.  The two upper decks were very interesting, but if you come when there are larger crowds the museum exhibits would be very difficult to enjoy.  We had, what I would consider, a maximum crowd to enjoy and read the exhibits.  At this point, most pre-teen children would have a marginal interest.  However, a teenager, especially one who has a healthy education in natural science and Biblical study, would find most of these exhibits educational, compelling, and professionally designed.

There was a special place for me that I spent a great deal of time contemplating.  It was a particularly emotional place that I didn’t expect.  The Door. God said to Noah, “You shall set the door of the ship in its side”.  The metaphor of the “Door” is used frequently in the Bible.  Yet, the reality of this door really hit me when I stood there.  Jesus said “I am the door.  If anyone enters by Me, he will be saved. . .”  As I surveyed that great wooden door on the side of Noah’s ship I considered Jesus words.  “I am the door”.  That great ship was for the salvation of mankind.  In the same way, Jesus is the salvation of mankind.  Yet, the book of Genesis tells us that there came a day, after Noah and his family were safely on board, that Yahweh God shut the door.  I stood there in tears before that giant wooden deleth [Hebrew: door] and considered the woeful screams of the people outside when the destruction began.  Imagine the water crashing against the sides of that great ship while men, women, and children, in panic, pounded on the door.  Yet it was too late, the door was shut and sealed by the hand of God himself.

Those people who had rejected the warnings of Noah would die terrible deaths.  Their screams would have been heard inside.  Not strangers, these are the workmen who toiled alongside Noah, many would have been family and friends.  Yet, they did not heed his words.  How long until the screams fell silent that eerie night?  How long before their ears were no longer assaulted by the pleading of their loved ones?  How long before the mothers who could no longer hold their crying babies above the water would lower their arms and submit to the death of the cold water?

At that door I considered not only the deaths of thousands, even millions of souls that terrible day, but I considered the eternal deaths of billions today when God will again close the door.  The day will come, the day is coming soon, that God will no longer strive with mankind.  The day will come when it’s too late.  No amount of screams, no amount of pleading will open that door again.

One interesting side note: The Hebrew word for Ark used in the bible is “ta-va”.  This word is used twice in the Hebrew Torah [Bible], first for Noah’s Ark and the second is the basket that carried Moses down the river to safety.  Both were used exclusively for the salvation of God’s people.  This could be a whole article all by itself.

We returned to our RV shortly after noon and felt we had seen much of the Ark and its exhibits.  We couldn’t leave the parking lot because our motorcoach is much too large to navigate the tight parking spaces.  We didn’t mind, we enjoyed lunch, I took a nap, and then I returned to the ship for a second tour, this time without Amy.  This gave me an opportunity to roam the grounds, to snoop around and take the time to absorb the magnitude of this great ship.  I spent a great deal of time outside, under and around just trying to envisage the eminence of this floating wooden engineering phenomenon.  I returned to many of the more extensive exhibits that Amy wasn’t interested in.  In addition, I returned to the Door.

I Finally returned to the motorcoach and soon the parking lot opened enough to allow us to wiggle out.  We had to move some directional orange cones and find our own way out, the exit drive was not designed for large vehicles.  But we are used to making our own path.

The cost of the Ark is $40 per person plus an insulting parking fee of $10 for cars (or $15 for an RV).  I feel that price is overinflated and unrealistic.  Maybe someday when they have a full amusement park for children this could be acceptable, but for someone on a modest income, this price is painfully steep for what you see.  There is no question that the ark is breathtaking and professionally done.  Don’t mistake this for just another Christian museum, this is a money-making operation and the opportunities for you to spend a significant amount of your money, even after the $40 admission, is plenteous.

One last critique, although not offensive in any way, this is advertised as a fully wooden structure.  I guess I had an expectation of a duplication of how Noah might have actually built this enormous boat.  This structure is a heavy steel commercial building, made to look like a wooden ship.  The wood boards cover everything yet most of the wood is not structural in any way.  I had hoped it would be more realistic in construction, but I’m sure that would be a legal impossibility.  This building had to meet modern commercial building codes and is expected to last many lifetimes.  Noah’s boat only needed to last through one terrible storm over the course of about one year.

I have to give a huge thank you to a friend who helped us make this visit a reality.  I thank God for men like Ken Ham who had the vision, resources and connections to make this possible.  But more than that, I thank God who found the mercy to save the family of Noah and provide life to a dying and sinful world.  God again has shown great mercy through his own Son Jesus who is the “Door” and the way of life.  Only those who enter eternal life through Jesus will find life.  All others will find only death – eternally.  Please heed the voice of Noah and turn from your wickedness and cry out to Jesus who is “The Way, the Truth, and Life, no man comes to the Father except by Me [Jesus]”.

One day the DOOR will close forever.